In the world of avatars, interactive virtual assistants, and robots, it’s vital to steer clear of the “uncanny valley.” Originally coined “Bukimi no Tani Genshō” by Japanese roboticist Masarhiro Moti, the uncanny valley is “the phenomenon whereby a computer-generated figure or humanoid robot bearing a near-identical resemblance to a human being arouses a sense of unease or revulsion in the person viewing it.” Or in layman’s terms, non-humans that appear too human-like are creepy, and people don’t like them.

The uncanny valley isn’t a matter of opinion, either. Dr. Ayse Saygin, Principal Investigator and Associate Professor of Cognitive Neuroscience and Neuropsychology at UC San Diego, has conducted several experiments that scan the brain for reactions to the uncanny valley. And the responses are completely involuntary. The brain sends mixed signals when a person perceives that a subject is human, but it lacks all of the basic characteristics (i.e. it waves like a robot or looks a little too cartoonish still). “Your brain’s gonna be like, ‘Hey, wait a minute, you told me this was a human, and now this area told me that this is not moving like a human. So, I have to really compute that,’” Saygin said.

An article in The Atlantic hit the nail on the head when Sara Watson wrote, “The uncanny valley of robotics is grounded in the social cues of the visual. We are repulsed by the plastic skin, by the stilted movements, by the soulless eyes of our robotic counterparts.”

So, what exactly falls inside the uncanny valley?

There’s a reason why animated movies more often feature non-human subjects as the main characters. Films like Cars, Horton Hears a Who, and Madagascar become box office hits overnight. The same can be said for television shows like My Little Pony or Teenage Mutant Ninja Turtles. All of the main characters talk like humans and act like humans, but they don’t look like humans, even if they hold certain human characteristics, like facial expressions.

However, some directors rely heavily on the uncanny valley for their filming needs. Going back to that uneasy feeling that arises when a person sees something very human-like but knows it’s not human, several villainous characters are remembered because of their placement in the uncanny valley. Some examples: 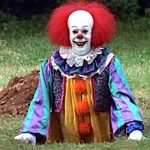 2. Season one, episode 10 of R.L. Stine’s TV show Goosebumps was titled “Night of the Living Dummy II.” The ventriloquist dummy, Slappy, looks like a person, but the inhuman mouth movements and lack of expression are what made him so unsettling.

3. There’s a trick that’s used in a lot of horror movies to make a character move unnaturally. If you film the actor making movements backwards as “naturally” as possible, and then play it forward, they walk in very unnatural, jagged movements. You can see this in the movie The House on Haunted Hill, when the surgeon enters the dungeon room on the security camera (see it in action here: YouTube). He is a person, but he does not move like a person, so the unnatural movement clues your brain into realizing something isn’t quite right.

These characters are so unsettling, because although they look very close to humans, their movements, mannerisms, and a few features defy the laws of natural human design.

How to Avoid the Uncanny Valley 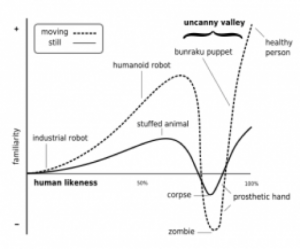 Digital animators must walk a fine line when creating characters so as to not fall into the uncanny valley. While some films have accidentally created uncomfortable characters, like Beowulf and Hulk, several others have managed to avoid this by simple characteristic changes. The basic premise of the uncanny valley is that as a character becomes more human like, they move closer to the valley. At a certain point, they fall into the valley and don’t reemerge until a real human is being used.

One of the techniques to avoid plummeting to the bottom of the valley is what we call the 60/40 ratio. With our avatars, we aim to keep the characters about 60% realistic and 40% cartoon. This ratio typically receives the best responses from our clients. Here are a few tricks for creating attractive, human animated characters used by many successful 3D artists:

See our avatars in action

We’ve developed a demo site to introduce you to Holly, our intelligent avatar who will walk you through a health check-in. During the experience, ask her questions at any time – about COPD or about herself – and she’ll answer you and then get back to the task at hand. Check it out here.